How to Manage Microsoft Teams: PowerShell and the Graph

This is part one of a three-part series on How to Manage Microsoft Teams: An Admin Guide by Greg Jones, Product Owner at Quadrotech. We will be releasing sections of the guide over the coming weeks, but if you would like the entire copy, you can download the free guide here.

There are now three ways to manage Microsoft Teams natively. The first is through the Microsoft 365 Admin Center. This will allow you to manage the users and groups associated with the Teams and you will also have a link in the Admin Center to get to the Teams Admin Center.  This won’t be covered here except to mention that if you are a Global Admin you have full rights.  If not, you will need to be added to the “Teams Service Administrator” role in AAD.  The other 2 options that will be covered here will be management via PowerShell and via the Graph API.

For both methods, we will be creating the “UK Finance Team” with a “Regulatory Compliance” channel with members allowed to create and update channels, but not allowed to delete them.  Users will also not be allowed to add or remove apps.

Let’s deal with PowerShell first since it is a more common approach for administration.

The first step in managing Teams via PowerShell is to install the Teams Cmdlets module.  Running PowerShell as an Administrator, you will need to run the following and allow install from the untrusted repo as well as installing the NuGet package:
Install-Module -Name MicrosoftTeams

Connect PowerShell to the Tenant

Voila…you are connected to Microsoft Teams as long as you have the appropriate rights.

You can now run Get-Command -Module MicrosoftTeams to list the available cmdlets. 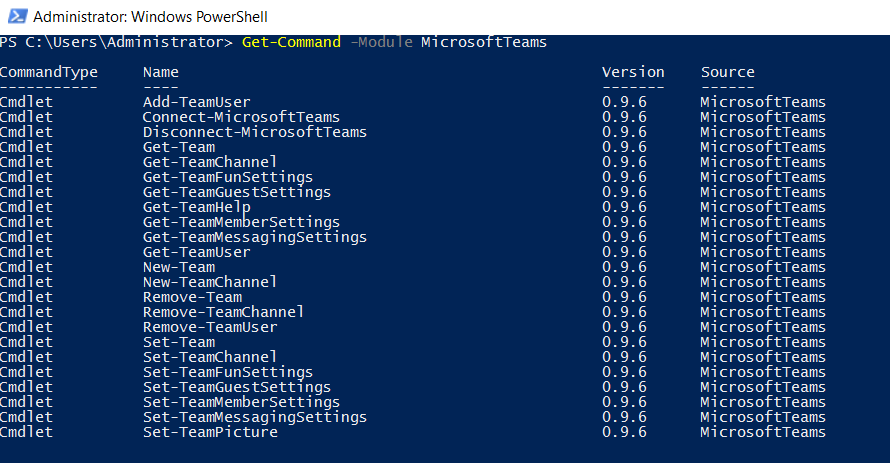 For this example, we will create a new Team.  If we look at the results of a Get-Help New-Team -Full, you can see the syntax of the command as well as the parameters. 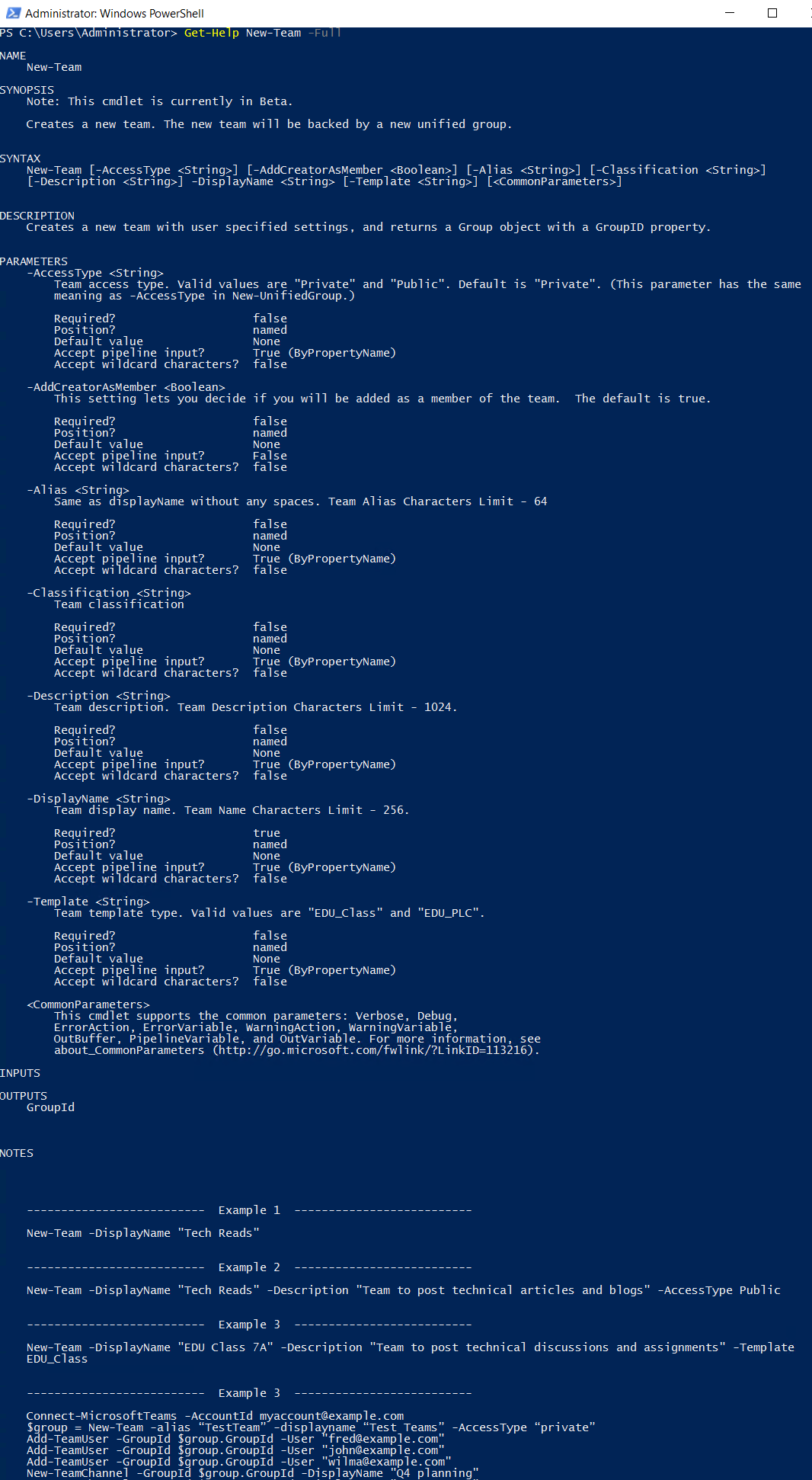 We can create a new team.

This will provide us with the GroupID for the Team so we know the cmdlet was successful.  The Team is created, but it does not have membership, channels, or settings.

A member has been added to the Team, and a new channel has been created.  You will notice that the channel has an ID associated with it that will be needed for the management of that channel.

I mentioned I would not cover all the settings cmdlets, but I will briefly cover the TeamMemberSettings as an example because I want my users to create channels but not delete them, and I also do not want them to add/remove Apps.  I can run Set-TeamMemberSettings to do this.
Set-TeamMemberSettings -GroupId 4a07317c-c860-47db-9a85-00113764d528 -AllowCreateUpdateChannels true -AllowDeleteChannels false -AllowAddRemoveApps false

I now have my team created “mostly” as I would like but it has taken me a while and a lot of commands to do this.  Let me delete the team.

That is a bit more straightforward, but it could still be easier.  Microsoft has impeded a beta feature, for now, to easily create a team based on a template.  However, this will be covered later.

We can do the same thing via the Graph API with either user-level or application-level permissions.  If we look at the documentation you can see that, just like PowerShell, there are different resources to create and modify Teams.

Create the Group and add Members

Using the same example but via Graph, I need to create the group before I can create the Team, and the group needs to be an Office 365 Group.  I will also add my user as an owner and a member of this post. 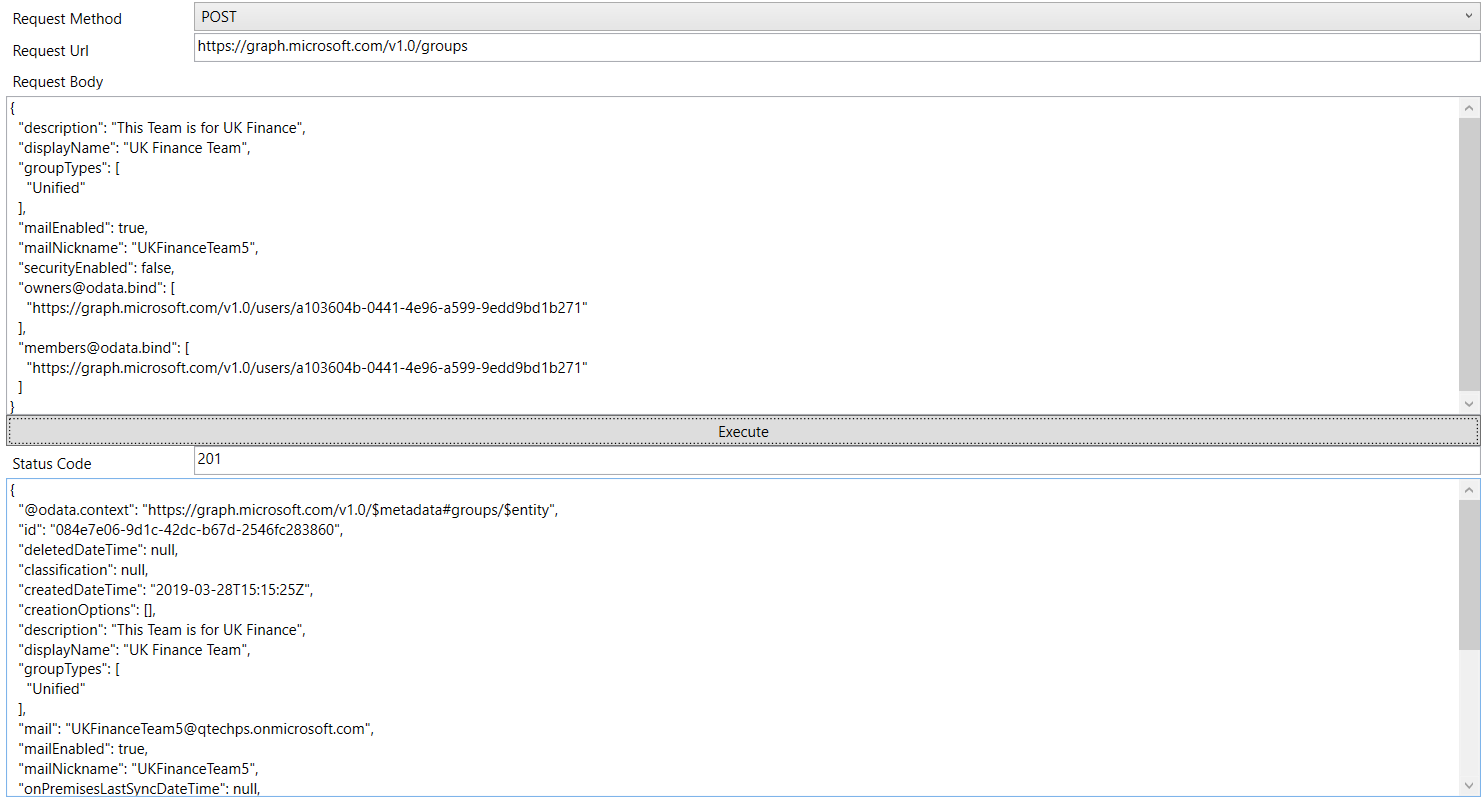 The important part of the response is the ID of the group. In this example it is:

Create the Team with Settings

With the Group ID we can now create the team along with our settings with a Put:

Now we have a group with members and a team with settings, but we still don’t have any Channels.  We can now create the channel with a POST. 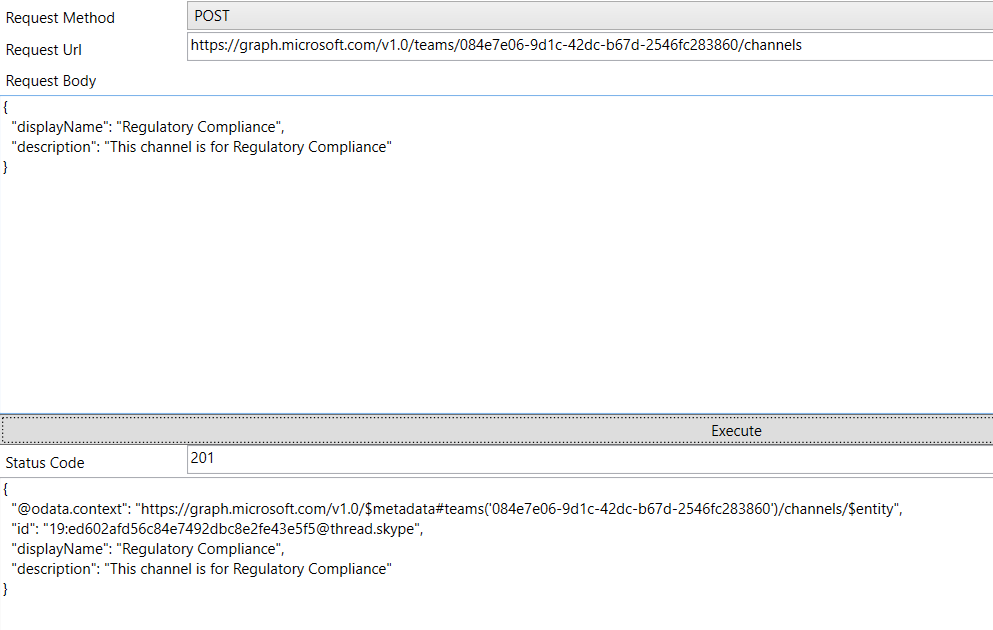 As you can see, there are a few steps involved to get what we want. So, the next question is, how can we make this simpler? Can we create a Team with the Graph API in a single process – like was done with the scripting in PowerShell?  Well, we can now in Beta endpoints using templates.  But as I mentioned before, we’ll be covering templates later.

You can see that whether you use PowerShell or the Graph, the Team is created with the settings, members, and channels you have defined. I think it is also interesting to do the creation this way to understand the underlying relationship between workloads to create Teams.

The next article in this series on Teams management will look at the creation of Teams templates, which is currently in Beta. This method delivers a more programmatic approach to Teams creation. Make sure you stay tuned on the Quadrotech blog to see the next installment. Or, if you can’t wait that long, you can download the entire “How to Manage Microsoft Teams” guide here.

Alternatively, you can explore our Office 365 management solutions here. 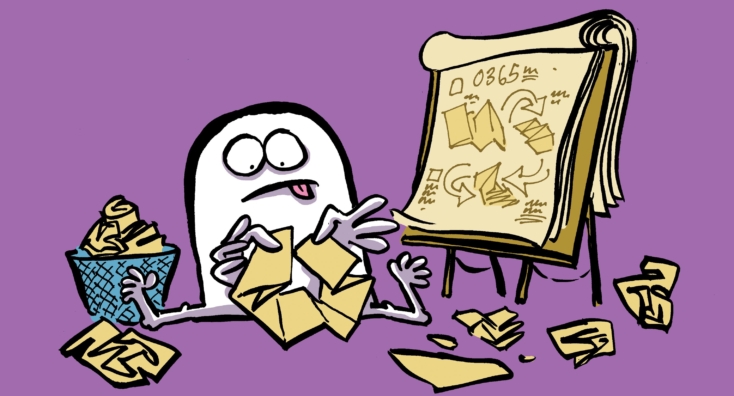 How to Migrate to Office 365 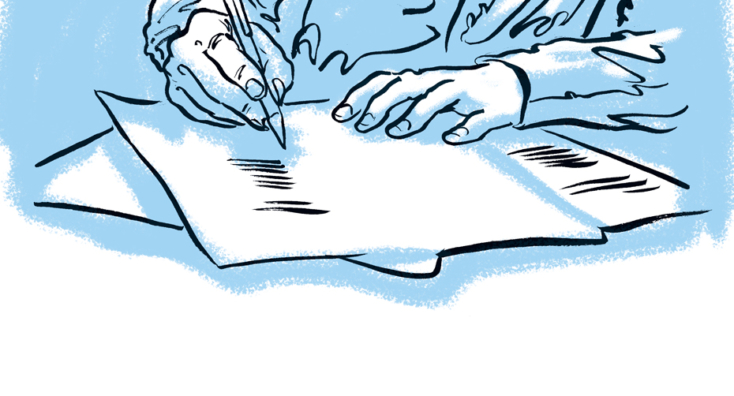